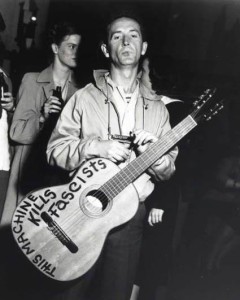 LapTopRadio.org organized a special broadcast. The broadcast “Fight The Power” drawed inspiration from the eponymous Public Enemy song that was broadcasted live and continuously in 1991 on one of Belgrade’s dissident radio station, B92. 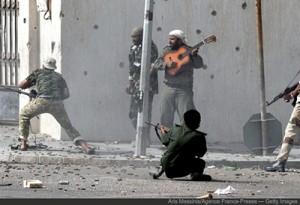 Within the context of today’s political and social disruption all around the globe, from Libya to America- protest and radio, music and diffusion, sound and amplification seem to be of relevant importance. The Libyan musician-soldier and Slavoj Žižek’s intervention on Wall-Street (after the police forbade the use of megaphones during the occupation) are therefore symbolic: the guitarist seems to handle his guitar like a machinegun whereas the chorus (in the classical sense) denounces with a massive critical voice the iniquitous situation. 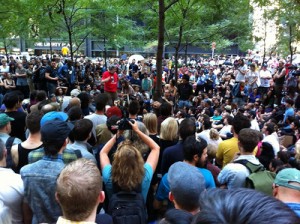 The subject of the evening could be summarized as an attempt to analyze the geopolitics and dialectics of protest songs. That is for the theoretical part; pragmatically the broadcast consisted of a collective live atopic sound performance. A number of invited artists, writers, activist and musicians remotely contributed in real time.
Fight the Power took place within the project “This Machine Kills Fascists”, inspired by Woodie Guthrie guitar inscription and dealing with protest songs in the widest meaning. The project declines in a multitude of formats that will finally result in an exhibition taking place in 2012, Geneva.